– “Waiting for the Miracle” by Leonard Cohen

Oliver Stone’s “Natural Born Killers” might have played even more like a demented nightmare if it hadn’t been for the O.J. Simpson case. Maybe Stone meant his movie as a warning about where we were headed, but because of Simpson it plays as an indictment of the way we are now. We are becoming a society more interested in crime and scandal than in anything else – more than in politics and the arts, certainly, and maybe even more than sports, unless crime is our new national sport.

“8th and final rule: if this is you first night at fight club, you have to fight!”

Fight Club is a David Fincher’s movie released in 1999 based on the novel of the same name written by Chuck Palahniuk. Norton plays the unnamed protagonist, an « everyman » who is discontented with his white-collar job. He forms a “fight club” with soap maker Tyler Durden, played by Pitt, and they are joined by men who also want to fight recreationally. The film’s narrator attends support groups of all kinds as a way to “experience” something within his unfeeling, commercial existence.

Fincher intended Fight Club’s violence to serve as a metaphor for the conflict between a generation of young people and the value system of advertising.

Director Ridley Scott spins this yarn concerning a Harlem drug kingpin (Denzel Washington) who smuggles heroin into the country by hiding it in the bodies of U.S. soldiers killed during battle in Vietnam.

Nobody used to notice Frank Lucas, the quiet driver for one of the inner city’s leading black crime bosses. But when his boss suddenly dies, Frank exploits the opening in the power structure to build his own empire and create his own version of the American Dream.

– THE EXORCIST directed by William Friedkin 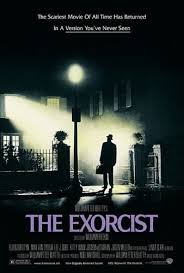 The Exorcist is a 1973 American horror film directed by William Friedkin, adapted by Willima Peter Blatty from his 1971 novel of the same name the 1949 exorcism case of Roland Doe,deals with the demonic possession of a 12-year-old girl and her mother’s desperate attempts to win back her child through an exorcism conducted by two priests.