– “Where is my mind” by Pixies from Fight Club

Fincher was concerned that bands experienced in writing film scores would be unable to tie the movie’s themes together, so he sought a band which had never recorded for film. He pursued Radiohead ,but chose the breakbet producing duo Dust Brothers to score the film. The duo created a post-modern score that included drum loops, electronic scratches, and computerized samples. Dust Brothers performer Michael Simpson explained the setup: “Fincher wanted to break new ground with everything about the movie, and a nontraditional score helped achieve that.” The end credits feature the song « Where is my mind » by the Pixies.

“8th and final rule: if this is you first night at fight club, you have to fight!” 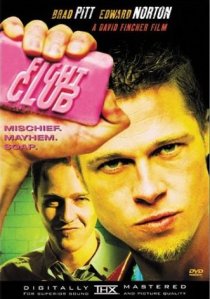 Fight Club is a David Fincher’s movie released in 1999 based on the novel of the same name written by Chuck Palahniuk. Norton plays the unnamed protagonist, an « everyman » who is discontented with his white-collar job. He forms a “fight club” with soap maker Tyler Durden, played by Pitt, and they are joined by men who also want to fight recreationally. The film’s narrator attends support groups of all kinds as a way to “experience” something within his unfeeling, commercial existence.

Fincher intended Fight Club’s violence to serve as a metaphor for the conflict between a generation of young people and the value system of advertising.